Terrain vague is first of all the title of a series of photos shots by Man Ray near Gare de Montparnasse in 1929. The place is empty, sad and intensely lyrical. The year is that of the great desolation, of the economic and social crisis caused by the collapse of the Wall Street stock exchange, and the thunderous conclusion of the Jazz’s Age.
Terrain vague is also the title of a film made in 1960 by Marcel Carné, that describes the story of some guys who live in the suburbs of Paris. To escape from boredom, Dan, Lucky, Babar and other rebellious teenagers create some gangs, with initiation rituals, and organize incredible thefts. Along with the existential void, co-protagonist of the film is the emptiness of a landscape that reveals a post-industrial profile.
Terrain vague today is primarily an urban concept coined by Ignasi de Solà-Morales in the mid-nineties. According to the Catalan architect, the residual urban areas, excluded from productive circuits, are lands with an own temporality that goes beyond that imposed by the urban planning, represent places where the void is an absence, but also a hope, situations where the emptiness is an indispensable condition for the most fruitful of possibilities. In the sense proposed by the exhibition of Christiane Beer and Elena Modorati at Theca Gallery, the terrain vague is the meeting between art and contemporary philosophy, the space in which matter is full of intuitions arisen reading Bachelard or Didi-Huberman, the context where wondering about the influence of the thought upon artistic expression and vice versa.

«Terrain vague or space that avoids definitions, slippery surface that makes insidious every sociological and urbanistic approach, no-place characterized by metaphysical temptations in which, however, it is difficult to fall. On the terrain vague of this exhibition the artworks of Christiane Beer and Elena Modorati lie in a deliberately problematical way. Some traces of philosophical investigations join these artworks together: first of all about the conception of the threshold in the thought of Carlo Sini, but also about the "intimate immensity", the formula coined by Gaston Bachelard to define his idea of home, and basically even his conception of space tout-court. To become intimate, the immensity must seek "the deeper relationship between small and large", between point of view and horizon, single beat and rhythm. To become immense, intimacy must have "the character of intensity", must be open to the "vastness of poetic imagination," must accept that "the intimate space and the outer space encourage themselves, as it were, in their growth". The artworks of Christiane Beer and Elena Modorati meets themselve in these oscillations, in these lyrical paradoxes. Intimacy and immensity, but also exteriority, intensity, poetic vastness are aesthetic categories usual to the expressive researches of the two artists, and basically also to their conceptions of space». 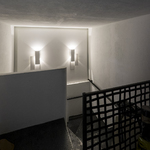